This is Pancakeland, where those who train in the art of PancakeDancing gather.

So guys i'm writing the Sequel to our first Pancake Quest. Its a tale about the Battle between Good and Evil(Pancaked and Waffles)

This is a little psynopsis

After ekacnap's Death the world are in Peace.
But a dark cloud is rising, an secret wafflecult is gathering supporters all over the east. Amongst them there is a great darkwizard called elffaw , he inherited the black book of waffles that had been passed down from generation to generation amongst Russian Darkwizards. Inside the book lies the secret of resurrection. Somehow elffaw finds it and awaken one of earths former defenders Ezekiel. Together with Ezekiels powers the Wafflecult unleashes their evil against the Earth
And again it's up to Beast and his band of Pancake Dancers to once again defend mankind from the Evils that threatends them.

If you have some idead, send me a message. I want this to be an Epic tale of Curage, death and Pancake Dancing.
With you guys help i can make an Epic Story.

darn i have been slacking on this site 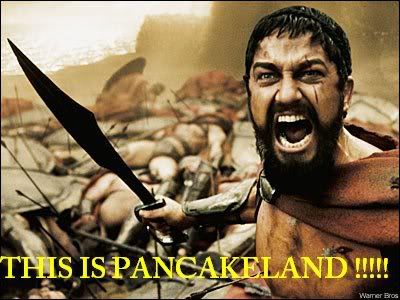